I visited some friends the other day. It was a warm evening so we sat in the garden chatting. Moments later they both went into the house to prepare some refreshments and left me in the garden alone.

I sat admiring the view when suddenly out of the bushes came a fox. He moved around for a few seconds then hid again.

When my friend came out I told him about the fox. “Can’t be a fox” he said, “we live too far into town for a fox to come here …”

I said nothing and continued our conversation. Minutes later out came the fox again for a short while.

My friend shouted to his wife still in the house “We’ve got a fox in the back garden!”

Her exact reply was “Can’t be a fox, we live too far into town for a fox to come here!”

He called her a doubting Thomas and laughed it off.

Later that evening I thought about Thomas the disciple. What a service he did for Christianity without realizing it. By doubting Christ’s resurrection Jesus appeared again, and this time Thomas saw Him. The whole event was witnessed by the other disciples and recorded for us to read years later.

Had Thomas not doubted, we would have lost a valuable piece of evidence of Christ’s resurrection.

Jesus said to him, "Do you believe because you see me? How happy are those who believe without seeing me!" John 20:29.
Posted by Victor S E Moubarak at 9:06 AM

Patron of this Blog 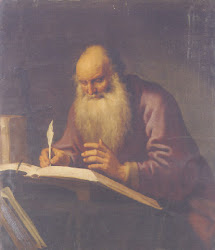 Grab For Your Blog

Blogging for Jesus
Powered By Ringsurf